18 Famous Movies which are based on Books 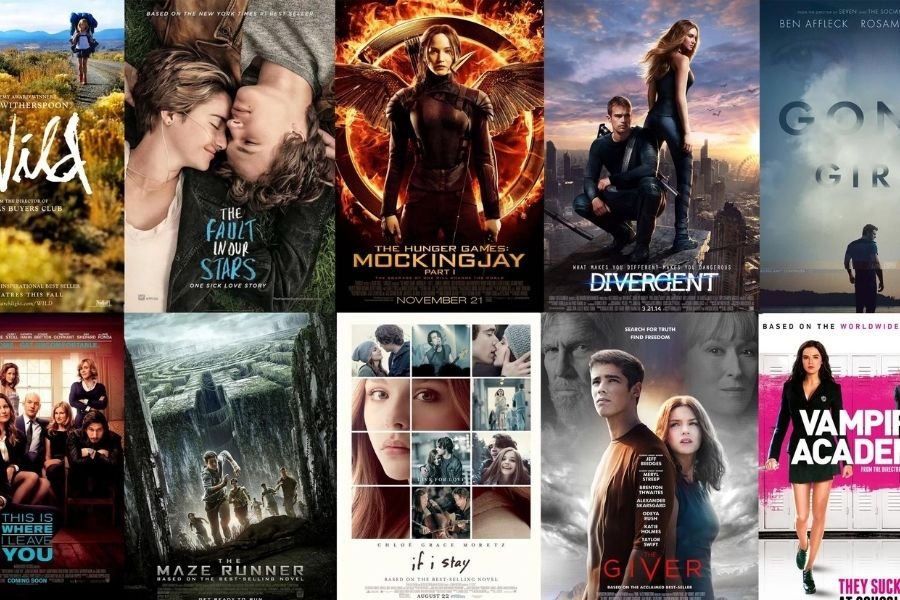 How many books are inscribed in a day? In a month? In a year? A lot! But only a few of them are the ones that make some sort of mark on the readers.

If a book has authentic potential, it magnificently gets transformed into the realism of a movie. It brings more life to the characters as they achieve a face. The readers grow in numbers as the audience.

Table of Contents show
Hence, here are 18 famous movies which were based on books.
1. Harry Potter and the series by J.K. Rowling
2. To Kill a Mocking Bird by Harper Lee
3. To All The Boys I have Loved Before by Jenny Han
4. The Kissing Booth by Beth Reekles
5. The Perks Of Being a Wallflower by Stephen Chbosky
6. Breakfast at Tiffany’s by Truman Capote
7. GIRL, INTERRUPTED by Susanna Kaysen
8. The Godfather by Mario Puzo
9. Crazy Rich Asians by Kevin Kwan
10. Twilight by Stephenie Meyer
11. PRIDE AND PREJUDICE by Jane Austen
12. The Fault in Our Stars by John Green
13. The Hunger Games by Suzanne Collins
14. Room by Emma Donoghue
15. Life of Pi by Yann Martel
16. It’s Kind of a Funny Story by Ned Vizzini
17. 3 Idiots by Chetan Bhagat
18. Call Me by Your Name by André Aciman

Hence, here are 18 famous movies which were based on books.

1. Harry Potter and the series by J.K. Rowling

This most famous series of seven fantasy novels won the hearts of all people that read the books. In 2001, the first movie of the series was released, named Harry Potter and the Philosopher’s Stone. Ever since it has broken awards and is still ranked on top.

2. To Kill a Mocking Bird by Harper Lee

This masterpiece was originally published on 11 July 1960. With powerful storytelling, it endured becoming one of the best literary works of all time.

3. To All The Boys I have Loved Before by Jenny Han

With 3 movies in this series, To All The Boys I have Loved Before has become a heartwarming movie for all the teenagers out there. Be the romantic angles or the family connection of the story is beautifully shown.

4. The Kissing Booth by Beth Reekles

This teen romantic comedy was originally published on the Wattpad platform by 15 years old Beth Reekles. In no time, it became the most loves teen drama on Netflix.

5. The Perks Of Being a Wallflower by Stephen Chbosky

A story that deals with the topic of mental health, social anxiety, high school life, friends, child abuse, etc. with great visual performances were also acclimatization from a book.

6. Breakfast at Tiffany’s by Truman Capote

Published in 1958, Breakfast at Tiffany’s became one of the most needed drama books to all. It was later converted as a movie in 1962, which also made rounds.

This 1999 movie was based on the best-selling 1993 memoir by Susanna Kaysen. It revolves around various mental disorders. When moulded into a film, it ideally showed the travails of a mental patient.

8. The Godfather by Mario Puzo

Even today this movie as well as this book is the most acclaimed franchise ever. And it is for a reason.

This 2018 American drama is based on a book by the same name that was published in 2013. It is fun, hilarious, and soothing to watch.

With mixed reviews, Twilight still has a good audience that clashes over the two male leads (who are you? Team Jacob or Team Edward?).

11. PRIDE AND PREJUDICE by Jane Austen

Jane Austen is what we call an acclaimed writer. Pride and Prejudice, be it the movie or the film, had a great sense of artistry which everyone needs to capture.

12. The Fault in Our Stars by John Green

John Green’s many novels had got the opportunity to be fragmented as full-fledged movies like Paper Towns and Let It, Snow. But what his debut novel has found in terms of popularity is unmatched.

The Fault in Our Stars had a Hindi remake too in 2020, called Dil Bechara.

13. The Hunger Games by Suzanne Collins

Which one is better? The movies or the books? If you are still stuck here, you are not alone. With a powerful and attractive storyline, The Hunger Games became one of the most famous movies.

This powerful story revolves around a rape victim who is kept as a hostage for over 8 years in a room where she gives birth to a child. That child grows in that particular room only.

The adapted movie was released in 2015.

A will to live is the translation of the title ‘Life of Pi’. The book captivates the mentioned significance of not giving up.

This movie was later produced as a film in 2012 with amazing cinematography and realistic scenes.

16. It’s Kind of a Funny Story by Ned Vizzini

This book was published in 2006 and then later was transformed into a movie in 2010. The story takes into consideration of various mental health disorders, and the need to fight back.

One of the most successful films of the Bollywood, 3 Idiots movie was adapted from Chetan Bhagat’s Five Point Someone. Though we can say that the movie was way more successful than the book.

18. Call Me by Your Name by André Aciman

Beautiful writing on a homosexual relationship between a man and a teenage boy. The movie was released in 2017.

7 Interesting Things About The Life Of A Scuba Diver

10 Ways to Think About Money