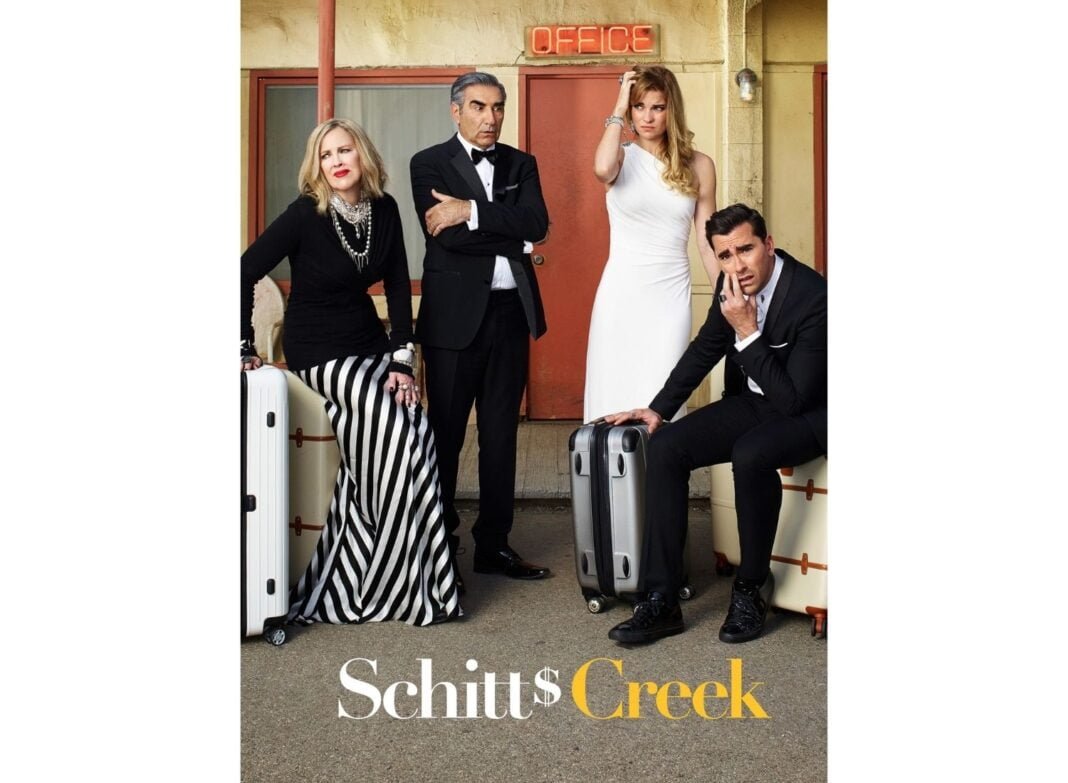 If there is a show that rose overnight and became the most loved show of all time, it is Schitt’s Creek. This fab show received 19 Emmy nominations and (deserved) grabbed 9 Emmy wins. Though, when Schitt’s Creek was released in 2015 on Pop Tv, it did not catch the mass of the audience’s eyes. It became the talk, it is today, only after its release on the most popular streaming site, Netflix, in 2017.

Someone who might be unfamiliar with Schitt’s Creek merit may wonder what is all this fuss really about it? Is it that good? How is it different from all the other infinite famous shows out there? Why should they invest their time in this show?

Well, your doubts are valid, and so, here is a list of 7 reasons why you should give Schitt’s Creek an honest chance.

Table of Contents show
7 Exclusive Reasons To Watch Schitt’s Creek
1. It is not any other show with a cliched theme and executions-
2. The depiction of the LGBTQIA+ community is outstanding-
3. The character’s growth is inspiring-
4. Fashion is just too bizarre, amazing, and elated-
5. Female characters are created in the best way-
6. You need this Brother-Sister goal-
7. Witty and hysterical dialogues-

1. It is not any other show with a cliched theme and executions-

Though, when you first read the storyline of the show, you might get weird out by the verbose and definably used concept of it, which is about an ultra-rich family who lost their entire finance and now has to start from zilch. They lost everything except for a steep small-town that the father bought as a mere joke, which becomes the oasis of their new life.

Apart from this idea, everything in the show will come as a refreshing sass to you. Each character has unique comings and is different from what you might have ever seen. You will find them being the ‘classic’ rich brats more than always but their taste is something you will treasure.

2. The depiction of the LGBTQIA+ community is outstanding-

Since the fight for achieving equal acceptance and respect from society is still a fleeted fight for the LGBTQIA+ community, this show marks a step in completely normalizing a gay relationship. Though having a homosexual relationship is not something which you might have seen for the first time on any show, yet the uniqueness of a relationship that is portrayed in Schitt’s Creek will force you to applaud them. They haven’t, at any point, crafted them as a ‘homosexual couple, but only as a romantic couple.

Even though the fight is still on for the pride members to deserve a relevant place in the society, a portrayal of such, that brings the raw frame of normalizing the LGBTQIA+ relationships rather than the ongoing upliftment is revolutionary. As normalization is all they need.

David and Patrick will make you fall in love with them. You will be shown normal problems that they encounter that on goes between every couple. You will see them fall in love, day by day.  It is one of the most beautiful parts of this amazing show.

3. The character’s growth is inspiring-

You will see all the characters becoming more than just money-breeders. They find things that they love or ‘find back’ the things that they used to love, in the most adventurous and inspiring ways. They grow as a family together, which is just beautiful to watch.

None of the characters will ever bore you and you will want to watch their ‘normal’ days, more and more. The difference in the character’s achievements, personalities, ideas, and emotions is massive throughout the seasons, which sadly, a lot of great shows lack to display.

4. Fashion is just too bizarre, amazing, and elated-

We all love characters who are devilishly stylish, I mean, just look at Rachel Green’s fanbase, it is mostly because of her wow fashion sense.

Now, If you have seen even the slightest bit of Schitt’s Creek (or even some mere posters), you will notice the eccentric and ‘fun’ dresses they have opted for. While with every new episode, you will be blessed with some of the most style-dived, lavish, and ‘over-the-top’ garbs you will ever see in a show.

Also, Moira’s wigs own different lives of their own.

5. Female characters are created in the best way-

It is again a solid deed portrayed by this show, which is, the picturization of females. Alexis, one out of the four main characters, IS a typically rich, blonde girl with no high school graduation degree but is beautifully shown being A LOT more than just that. She is not crafted as a shallow girl who doesn’t like other girls, in fact, her aesthetic friendship with Twyla, a waitress of a local café (though in last season you will find out that she is more than that), is delightful to watch.

While Moira and Jocelyn were made equally valuable as their husbands. Even Stevie finds herself growing throughout the six seasons from being just a receptionist to a businesswoman.

6. You need this Brother-Sister goal-

David and Alexis’s bond has a different fanbase itself. They are such a powerful sibling with massively mundane clashes and heartwarming scenes that you will so love to watch.

Also, ‘Eww, David’ and ‘Oh my god’ is what you will hear, all day long, even after being done with this wonderful show.

Though many shows play with the craft of comedy with heavy body agitation, Schitt’s Creek has a uniqueness in its comedy, as well. The on-point and intelligent dialogues (and their delivery) on Schitt’s Creek are just crazily funny. There are some pleasant jokes and then some flying punches, mixed-match in the best possible way, which deserves to become your next Instagram caption.

For you, here are some iconic one-liners for you to jazz on-

The greatness of this show is in its simplicity, or to say, it is simply the best. If you are still not convinced that Schitt’s Creek is worth your time, sorry my friend you are missing the fun in life!

How To Grow Herbs From Seeds? (9 Different And Healthy Herbs)