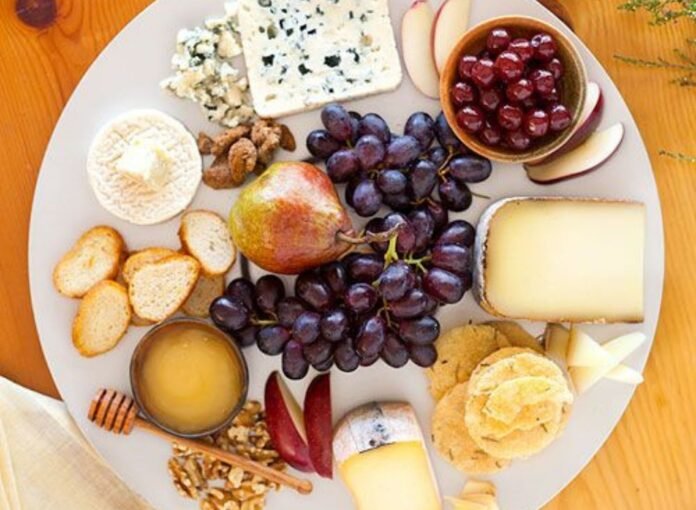 France provides us with a thousand different varieties of cheese. Let us look at the 7 most recommended ones!

A shepherd in love who wished to lure his woman put his sandwich of rye bread and sheep cheese in a cave where he was resting, according to tradition. When he returned to finish his lunch, he noticed mould on it, and so the Roquefort was born! The oldest documented reference comes from the XIth century, and it has served as a historical icon for the Causses and Aveyron valleys. Several privileges were granted to Roquefort residents in the XVth century by Charles VI and later by Charles VII.

Diderot, during the Age of Enlightenment, proclaims the Roquefort as the “King of Cheese.” The Roquefort basements are situated in the midst of the Combalou plateau, and the “fleurines” provide the necessary ventilation for the cheese’s growth.

The Langres cheese was first mentioned in a song composed by the city Dominican Prior in the middle of the XVIIIth century. It is also mentioned in a publication on cheese in the nineteenth century, with the Maroilles and the Livarot. The Langres is distinguished by the little “basin” near its apex. The deeper the basin is dug, the more aged the Langres cheese is. Basin is there simply because, unlike his main rival, the Epoisses, the Langres is never flipped. A small size requires at least 15 days of cheese-aging, a medium-size requires 18 days, and a large size requires 21 days.

The Brocciu, the Ile de Beaute’s national pride, is the only cheese created from whey, which implies Corsican ewes and/or goats’ whey. According to mythology, the Corsican shepherds threatened an ogre, an animal stealer, who divulged the Brocciu making secret in return for his life. The term Brocciu is derived from the word “brousse,” which refers to a Provencal fresh cheese. We may consume fresh Brocciu and passu Brocciu, as well as cheese that is aged for 21 days. As the author Emile Bergerat puts it, “the one who has never tasted, does not know the island”.

Cantal is a pressed, raw cow’s milk cheese. Pliny the Elder dubbed the Cantal “the cheese from Gables and Gevaudan area.” It is one of the earliest cheeses in history. Because of its large size that may weigh up to 45kg, the Cantal was already declared as food storage and trading goods around 2000 years ago. The cheese must be aged for at least 30 days. A young Cantal will require around 1 month of cheese-aging, a middle-aged Cantal will require 2 to 6 months, and an elderly Cantal will require more than 6 months.

Reblochon was born in the XIIIth century in the Haute-Savoie region of Thones. Farmers were not landowners throughout the Middle Ages, and they were required to pay a “right of use” fee on the amount of milk produced and to let their animals graze, which rendered its production unlawful. Indeed, following the controller’s visit, farmers began using “the Rebloche,” which involves squeezing the cow udders twice, resulting in exceptionally creamy milk. It was ideal for cheese, and it was even better because it was free! The Savoy was brought into the French Empire in 1860, launching the Reblochon trade, which was aided by the Annecy railway. Reblochon cheese is aged for 4 to 5 weeks on a thin, spruce slice.

Maconnais and Haut-Beaujolais produce this smooth, bloomy rind goat cheese. Bouton de Culotte was created as a result of the existence of goat herds in the region. It is the smallest cheese of all! Bouton de Culotte, also known as “Chevreton of Maconnais or Cabrion,” gets its name from its small size, which allows it to drain without being flipped, and its form which resembles a trouser button.

Tamanna Kavdia - September 6, 2021 0
Mewar is a Rajput dynasty that is associated with the glories of various warriors. Let us look at some interesting facts about the kingdom...

Sakshi Pathak - September 2, 2021 0
Our feelings are dynamic. They are not very much in our control, but at least trying our best to transfer them for better is...

Bored? Here Are 20 Fun And Productive Things You Could Do

Kanika Narang - September 2, 2021 0
Are you bored much? Yeah, me too! But you know Science tells us boredom often leads to great ideas and lots of creativity. When...

Kanika Narang - September 2, 2021 0
A migraine or a cluster headache is something I've been dealing with quite a lot these last few months. It's throbbing and a kind...

Kanika Narang - September 2, 2021 0
With the heat on a hike, we find ourselves craving for something 'thanda', something cool to drink. And often, to beat the heat, we...
0

Bored? Here Are 20 Fun And Productive Things You Could Do

Growing Up in and Across the 4 Stages of Life ...