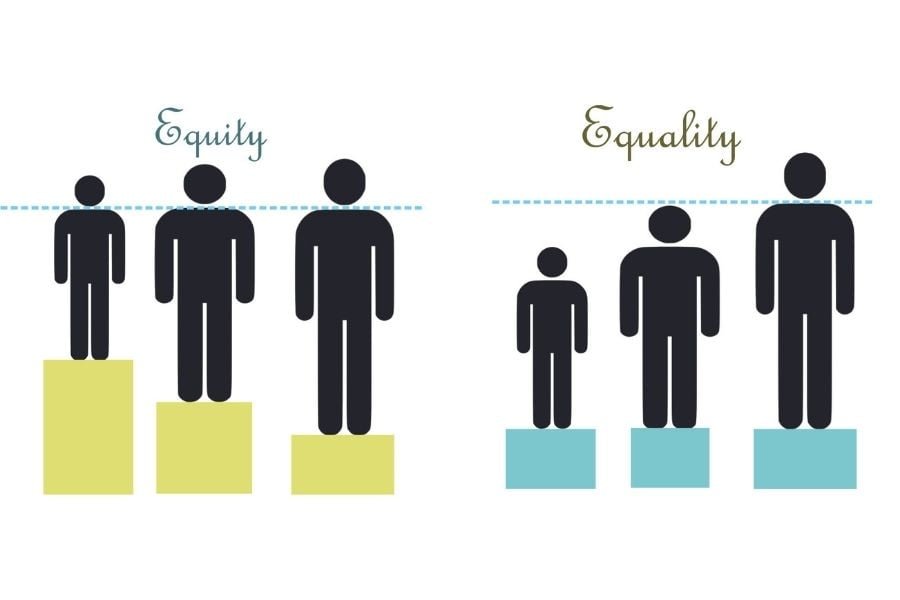 As we know, men and women are not equal. Black, whites, and coloureds are not equal. Rich and poor are not equal. No one is equal. It is a reality that must be underlined and understood fairly. The idea of people being not equal doesn’t necessarily mean it is negative, which is where the differences between equality and equity come in. Every difference is either natural or socially created and later passed onto the next generation; some differences are even fair.

The thing to understand is that the presence of these differences isn’t particularly ‘bad’, but the occurrence of social unjust due to these very differences is PLAIN wrong. It takes years and years, revolution after revolution, protests after protests, to make a community disparity cease to exist. With that emerged the term equality. Equality is based on everything. People use this term often, if not always. But do they know what it is? And whether this society will improve if we achieve equality?

Now, don’t hate just yet! Please read the whole article to find out the point we are hitting.

Table of Contents show
What Is Equality?
What Is Equity?
What Are The Differences Between Equality And Equity?
Is Equity Discrimination?
How Does Equity Fit In The Social Context?
Conclusion

As Google Guru says, a situation in which everyone has the same rights and advantages. Everyone is showered with the same opportunities and same reliefs. Isn’t equality just the best? Well, before really answering, read the further mentioned things.

Now, read this example out. A boss decided to give those who menstruate in the office an extra holiday per their first day of menstruation every month. At the same time, the men of the office did not receive this grant. Is it equality, then? Is it bad? The answer, here, is No and no. This very situation is an example of equity.

Equity is based on providing every particular thing in amidst of fairness to individuals. Here, not everyone will receive all the provided schemes equally but only those who actually need them. This system and process are known as equity. It is about providing people with what they need.

Equality and Equity are different terms, seems the very same, but are DIFFERENT.

What Are The Differences Between Equality And Equity?

Suppose we represent the definition of equity as the counter of equality. In that case, it will be stated as the situation in which the rights and advantages are given as per the need. While equity can decide the betterment of a community, equality does not promise any such thing.

If we extend the example provided above in the context where the boss functions on the concept of equality, he would either provide the same holiday to men, or there won’t be any such holiday given to women.

Yes, indeed, it is. Equity is very much discrimination. But the thing to remember here is that it is a flow of positive discrimination. It doesn’t ‘take away’ anything from anyone; it only works in ‘giving’ to those who need it.

How Does Equity Fit In The Social Context?

If we take about a very famous ideology that people practice worldwide, it is feminism. In a way, feminism is, when put lamely, equity. We know that everyone needs equal status in the world, but women are ‘more’ discriminated against without any fight. Hence, a battle for it is required.

Another very famous example is the emergence of ‘Black Lives Matter. We all know that all lives matter, but in countries where people are disfavored and repressed on their skin colour or status, they need an evident rain of something like ‘Black Lives Matter. And using the words All Lives Matter is never a good defence; it only weakens your argument because we’re talking about prejudice.

These examples tell us that equality is a good thing and should exist worldwide, but equity is a very much requirement. Equity in no way subdues equality, if anything, it is a complex way to reach equality.

In a world where many subjugations are based on many differences, equity should no more be any mere ‘theory’ but a practised reality. People need to acknowledge the ‘privileges’ they exist with and the oppression others suffer from what can be classified as, in all respect, lame ideas. Equity is a way of achieving a world where everyone is at least living, in, and with, suffice.