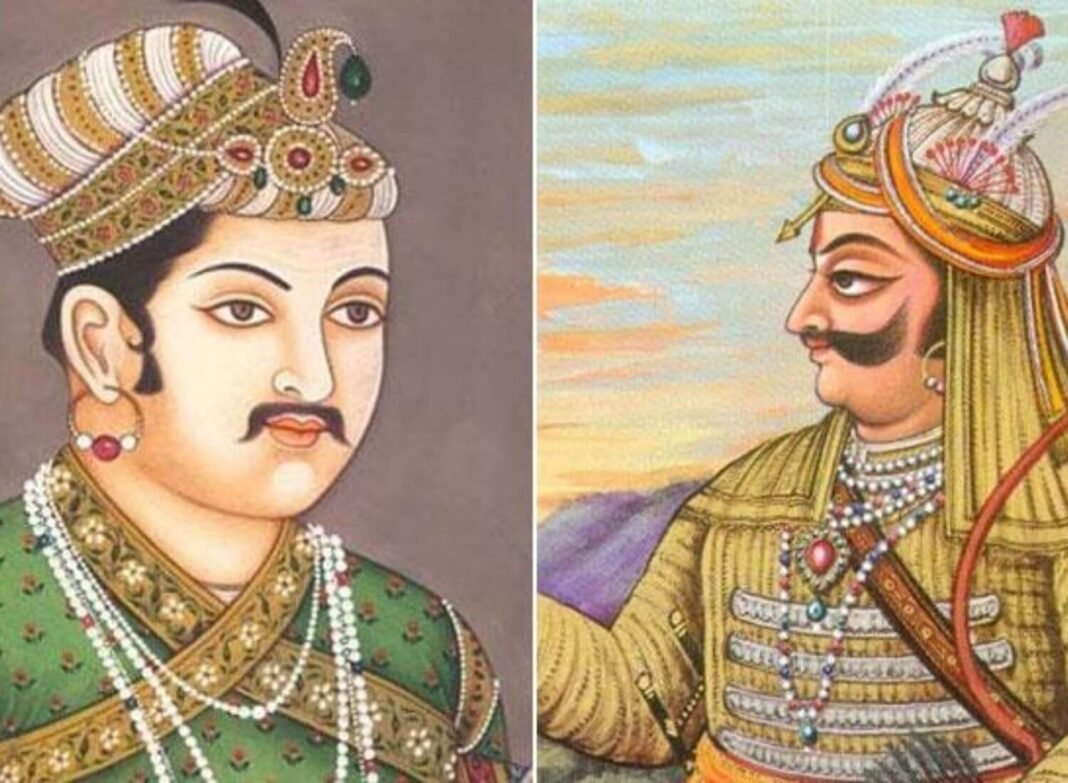 Mewar is a Rajput dynasty that is associated with the glories of various warriors. Let us look at some interesting facts about the kingdom and learn about following the reality behind the famous Battle of Haldighati, which is famously misinterpreted.

Mewar, also known as Mewad, is a region in the south-central part of Rajasthan. The region includes the present-day districts of Chittorgarh, Bhilwara, Rajsamand, Pratapgarh, Udaipur, Pirawa Tehsil of Jhalawar District of Rajasthan, Neemuch, and Mandsaur of Madhya Pradesh, along with some parts of Gujarat.

Mewar was founded in 530 AD by Bappa Rawal, who was an ancestor of the Sisodiya dynasty. It is believed that the term Mewar was initially slang for ‘Medapata’, which meant the Mewar Kingdom. It is the name by which Mewar was originally known as.

Table of Contents show
Chittorgarh- The Glorious Capital of Mewar
Maharana Pratap
The Battle of Haldighati
Not An Inconclusive Battle; The Reality Of The Battle
Conclusion

Chittorgarh- The Glorious Capital of Mewar

Chittorgarh was the capital for a long time of the Mewar dynasty. The continuous attacks by the Mughals made it vulnerable to wars. After a sage advised Maharana Udai Singh, the capital was shifted to Udaipur, surrounded by Aravalli ranges, making it a safe and secure space. Maharaja Udai Singh of the Sisodia dynasty founded the Udaipur city in 1559 AD.

One of the most celebrated warriors of Mewar is Maharana Pratap. Pratap was the eldest son of Udai Singh. In 1568, Akbar captured the Chittorgarh Fort, and the Mewar royalty was forced to take shelter in Udaipur. Conflict and debate arose for the succession, but in the end, Pratap was made the king as the court found Jagmal, the other contender, to be an unfit ruler for the dynasty.

Before getting in a war with the Mughals, Pratap was subject to the wrath of his domestic adversaries. During his reign, almost all the Rajput dynasties had surrendered to Akbar’s rule and became members of his council. Following this, Akbar had sent six diplomatic missions to Pratap for a peaceful alliance between them.

When the fifth diplomatic mission was sent, Pratap sent his son Amar Singh to the Mughal court, denying Akbar’s peace proposal. As Pratap didn’t present himself before the Mughal emperor, Akbar took offence, and the move angered him. This act of defiance made Akbar go ahead with the battle and fight against Pratap to conquer Mewar.

The Battle of Haldighati

The Battle of HaldiGhati, which took place in 1576, was a memorable battle, but various historians claimed to be inconclusive. In the battle, the Mughal forces claimed their control over Chittorgarh and tried to conquer the other areas. Pratap was successful in saving his life and returned to reconquer his lost territories.

In 1579, during the rebellions in Bengal, Bihar, and Punjab, Akbar had to loosen the noose on Mewar. Taking advantage of the situation, Pratap gathered an army using the money given by Dan Shiromani Bhamashah, who later became one of Pratap’s ministers and recovered most of his turf, including Kumbhalgarh and the areas around Chittor. He successfully gathered an army of 40,000 soldiers and conquered Kumbhalgarh, Gogunda, Ranthambore, and Udaipur from Mughal ally Jagannath Kachhawa.

Not An Inconclusive Battle; The Reality Of The Battle

As mentioned above, historians have claimed that the battle was “inconclusive”. But recently, these statements have been subject to criticism and debate.

Recently, the Rajasthan Education Board of Secondary Education has made amends regarding the war in its history textbooks. The revised books have mentioned that Pratap had “conclusively” won the 16th century Battle of Haldighati against Akbar.

This claim was supported by the event that Mughal Empire forces continuously spent time in a fearful situation in Mewar and did not chase the forces of Maharana Pratap. This is from the perspective of favouring Pratap.

While going ahead for the battle, Akbar aimed to get hold of Pratap himself and make him stand in the Mughal Darbar or kill him. Following which he would merge the Rajput king’s empire with his own, but in the end, he failed in achieving the objectives mentioned above.

Adding further to such claims, Dr Chandrashekar Sharma, a government professor, mentioned that one year after the battle, Maharana Pratap distributed land in various villages near the Haldighati region by handing out land rights inscribed on copper plates that had the signature of the diwan of Eklingnath. He argued that only the king of the province had the right to the land and was allowed to distribute the tracts of the land, which is further proof of Pratap’s rule.

Another claim points out that the two generals of the Mughal army of the battle, Man Singh and Asif Khan, were forbidden to enter Akbar’s court as a form of punishment. This can be another proof of Akbar losing the battle of the Haldighati.

In conclusion, the war is stated neither to be inconclusive nor to be won by the Mughal emperor Akbar. Historical evidence clearly points out that Mughal forces failed to take over Mewar completely, and the result of the battle favoured Pratap.

ALSO READ- Treasures In The Museums Of India

How to Revamp Your Closet in Five Quick Steps

Mediocrity is a State of Mind: Myth or Truth?