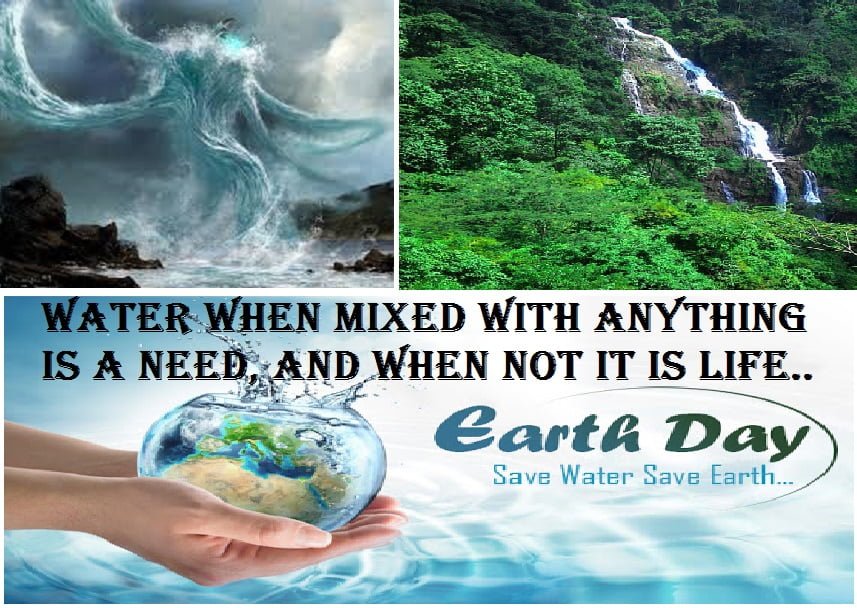 Water is commonly quoted as ‘an elixir of life. It’s difficult imagining a moment without it whether you see it in the evolutionary aspect or in modern-day usage. It accounts for about 70% of our body weight which implies that water intake is the key to a brisk, youthful life. It’s a keystone element of our sustainable ecosystem.

The life-sustaining liquid can do wonders!!!

It can dissolve, disintegrate, detoxify, drown the globe and whatnot. It’s like a supreme power that can play havoc if needed. The very liquid constitutes the essence of the origin of life. The whole universe persists because of it. Since it plays a vital role, it’s our responsibility to save water. From the origin of life to the generation of electricity, water has myriad purposes to fulfil. The unparalleled property of it being a universal solvent adds to its versatile use.

Table of Contents show
3 Varied Aspects of Water The Magical Element
1. WATER AND THE HYDRATING ASPECT
As Metabolism maintainer :
Keeps ailments at bay :
2. THE REASON FOR OUR EXISTENCE-
As a life creator:
3. SCIENTIFIC ASPECT –
Anomalous behaviour :
The wide variety of uses:
The reason behind greenery and vegetation:

1. WATER AND THE HYDRATING ASPECT

The human body requires at least 7-8 ltr of strengthening fluid during the day. It helps to maintain our body temperature as well as weight. It keeps a check on all the systems of the body. It helps in the detoxification of the blood and smooth excretion. The secret to a healthy and hearty life is drinking enough water to keep yourself rejuvenated and gleaming. Water acts as a stepping stone in attaining glowing skin and a good physique.

Most of the diseases can be avoided if a sufficient amount of water intake is there at regular intervals. It keeps you hydrated and shoos skin problems away, ensuring a longer life. It replenishes your body from inside, and thus, has a detoxifying effect preventing various diseases.

2. THE REASON FOR OUR EXISTENCE-

As a life creator:

Life incepted underwater. From magical particles which combined in its presence. Moreover, the life-sustaining gas- oxygen evolved from this.  If it were not for this fluid, everything would have been in flames and ashes because of the extremely high temperature of the primitive earth, the universe and the molten lava rocks.

Being dispensed with a versatile property probably makes the liquid stand out of all the other solvents. Its density is maximum at 4°C. In either case of heating or cooling its density decreases. Normally a substance expands on heating and contracts on cooling but here water shows a unique behaviour before and after 4°C of temperature.

In the case of water, as the temperature gradually increases from 0 to 4 density increases to reach a maximum at 4 and consequently volume decreases and so it contracts in spite of heating it. This is one of the major creativities of nature that helps other aquatic life to thrive at such cool temperatures under the ice layer. This property also controls the water cycle and maintains a balance.

The wide variety of uses:

This liquid finds so many uses in chemical as well as biological laboratories.
1. Used as a director to make aqueous salt solutions. Almost every chemical test is incomplete without the use of water.
2. The best and the most easily available liquid that can be used as a fire extinguisher.
3. It acts as a coolant for most dangerous and exothermic reactions occurring on a large scale.

4. Water helps in the easy weathering of hard rocks and the formation of soil, thus contributing to the survival of the ecosystem.
5. It also helps in bacterial decomposition by acting as a universal solvent for most of the organic and inorganic solutes.

6. The hydroelectric projects stand on the pillars of water which produces almost two-thirds of the total electricity generation across the globe.

The reason behind greenery and vegetation:

The beverage is like a mother with a potent force who nurtures the seed without which it’s difficult to imagine the greenery and life on Earth. Hence, it makes life sustainable on Earth. It’s the root of crop production, farming and irrigation.

After going through all the aforementioned information, I presume, it is crystal clear that water is one of the major reasons behind our existence and despite knowing the remarkable fact we are not bothered of the consequences if it gets defunct.

Well, to all the readers this is not a dialogue but a verity that “we are living on this planet as if we have another one to go to.” But my question is do we …. do we have a PLANET B ???
Take the initiative and even try to encourage others, otherwise, it won’t take long for us to become extinct as our essence of existence will be bygone.

With water pollution increasing day in and day out, it’s our prime concern to save every drop of it. Hence, please read and follow the various ways to save water indoors to sustain life on Earth. Just remember, even individual initiatives counts.

Also, do let out in comments if you know about any other mysterious aspect of the life boosting liquid, water.

5 Hacks To Deal With Failed Plans

9 Things People Who Are Smart With Money Won’t Do