Shades of People Unfold as the Situation Mandates 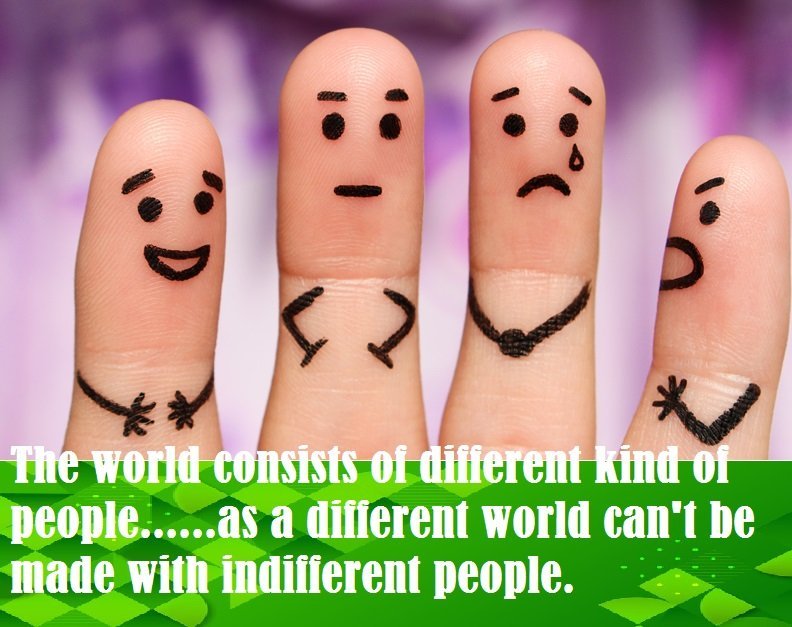 The different shades of people are reflected as per the situation they face.

You know what, “I neither believe nor disbelieve in the existence of God.”

And suddenly from an Agnostic, I evolved into a Disciple. The same is the scenario with all homo sapiens they tend to change with the evolving surroundings. This attitude of people assists them to function according to the circumstance they are encountering. At times the sweet side, while at others, a bitter edition is demanded.

Adequately, in order to grapple with a particular situation, we often go beyond our threshold and pan out displaying an entirely aberrant behaviour. “Excess of anything is bad” applies appropriately here as we must be real to ourselves, no matter what crisis reaches us.

Being begotten in such a manner that we largely have the remedy to our dilemmas, just the right perception is needed.

Every difficulty which turns up requires a different outlook, hence a different shade of or version which knowingly or unawarely unravels as per the occurrences. Our character is like wet clay which can be moulded if and when required. You can change yourself for the better or worse, depends on your perception.

Ironically, in a play different personalities enact the role of different characters. Reality is quite contrary to this, where man within himself plays the role of many characters at a time.

Table of Contents show
Some of the shades of people are highlighted as follows:
1. Self Centered
2. Altruistic
3. Agnostic, Atheist and Disciple
4. Egotist

Some of the shades of people are  highlighted as follows:

Largely, most of us position our own benefit above others. Hence, we all have a tendency to be self-centered. But clearly, this doesn’t mean that for our advantage we are inflicting any damage on anybody. So being self-centered is not bad at all if the situation imposes the same. Thus, we must not accuse anyone of being self-centered, as somewhere or the other all of us have been like that in some situations.

Situation – In general, all of us show a self-centered behaviour, i.e, keeping our benefits over others. In an examination hall, 90% of people prioritize their own good, either by not helping others or by annoying someone by continuously begging for help. There are hundreds of such circumstances, where the probability that we’ll position others’ benefits above ours is zero and hence depict our self-centered side.

Placing other’s benefits above one’s own is an edition of us very rarely acknowledged. It’s difficult to practice and consequently, we ignore being an altruist. But since there are millions of people around the golden globe, some definitely stand out with this version of themselves. Examples may be of Abraham Lincoln, Martin Luther King and many more who fought for others, without the desire for any recognition.

Situation–  When you realize that your happiness lies in others’ prosperity. Probably that’s the juncture where you start helping others without thinking of your own benefit. At times it may be out of sympathy, for example, helping the elderly people to cross the road or likewise.

At times, it may be out of empathy as you don’t want others to face the hardships you went through, like offering someone a job even if his qualifications are not up to the mark, but you can visualize their potential and also you as a youngster were rejected from many interviews for similar reasons. Hence, you feel that now since you are at the winning position you should hail the change. At times, the case is completely distinct when you solely evolve into an altruist – when you enter the phase of self-actualization like all great leaders (recognized or not) who combated for others.

As I exclaimed initially that as per our convenience we believe or disbelieve in an abstract quantity the case may be of  God, Parallel universe, Pure mathematics, etc. These are our shades which we exhibit when desired.

All have once been an egotist, boasting of our achievements. Look back at your immature self and you ‘ll immediately relate to what I am signifying. Thus, maturity, satisfaction and self-actualization curb this shade of ours up to some extent. So keep calm when you discover an egotist as it’s just one shade of them.

Situation–  If you are usually accused of being an egotist, then just remember it’s not you, but the wrong perception of the listener. Suppose you are from the weaker section of the society, have worked really hard and hence, earned a respectable position. There might be a possibility that not many of your colleagues, know about your background. Thus, when you tell them about the hardships, you have been through, they might feel you are just bragging.

Well, this is just one side of the coin, at times it is you, and not the one accusing you of egotism. As often we forget that we hold a very tiny place in this vast universe, and unaware of the fact, either we try to belittle others, or present ourselves way higher. Not just you, or me, everyone has a crumb of this shade within them.

There are thousands of colours in people’s personality, thus, the table sees no end.

Man is like a rainbow who perceives which shade to cultivate in which moment.

People who have an ulterior motive, to gain benefit from you will come up with their sweet side. We need to be cautious of such people pleasers.

You might like some shades of people and abhor the others. But you need to realize that it’s the life situations which compel us to be mean, self-centered and so on. Nobody intends to be selfish without a reason. Though people with dubious character are never appreciated. And we are always skeptical about the individual’s true side.

Consider a real-world example, a teacher is not a bad human as we assume them to be just because they reprimand us at times. It’s the work required which compels them to exhibit such varied hues: patience, strict, soft, loving, admonishing, etc. Many times they scold us or portray themselves as callous because they want us to learn something, if not by good commands, better by reprimands. It is important for them to plop in the strict version to fulfill their duty of teaching.

Similar to the above example, many of us are compelled to act like chameleons and reveal our various colours. Yet a true well-wisher is one who chooses to stay by your side even after acknowledging all your shades, be it good, bad or diplomatic.

Nature is created in such a manner that every creature, including humans, has needs and has to fulfill them, by hook or by crook, to sustain their existence. However, the truth still resides that the sincere aspect of people can be discerned only in their fortunate times.

10 Best Books By Fyodor Dostoevsky You Must Read